What follows is the hard work of some co-workers from my old institute.


Abstract: Food items that get caught in the throat are a common cause of concern and irritation. It can often lead to worries of esophageal cancer or cause restriction of breathing. "Sticky" foods can stick to the back or roof of the mouth and Gummi bears are particularly hazardous. Cases of "gummed up throats" (GUT) usually occur in young children or adolescents and have been known, in extreme cases, to become stuck in a person's throat for 2 weeks (citation needed). Here we investigate and validate the claim that Gummi bears are made more dangerous due to their ability to expand when soaked in water. This research also shows that while gummi bears expand over 48hrs their structural integrity causes them to shrink after this point - offering hope to sufferers of GUT.

Fig 1) Artists impression of "gummed up throat". A) is the assumed problem of a standard sized gummi bear sticking to the back of the throat. B) is the hypothesised "growing" gummi bear causing greater obstruction to the throat as described by survivors of the event.


Materials and Methods
Haribo Gummi bears were used in the experiments that followed. London tap water (Hard) was used in the experiment. Photo's were taken on Samsung Galaxy Nexus and processed on Facebook.
One yellow Gummi bear was placed in 250 ml of water in a glass beaker and left at room temperature. As a control another yellow gummi bear was placed next to the beaker at room temperature too. Measurements of Gummi bear size were taken at regular intervals by ruler and results processed by Excel.

Results
Gummi bears grow when exposed to water
Within 12 hours it was already apparent that the Gummi bear soaked in water was significantly larger than the control Gummi bear. The change in size was even more apparent after 48hrs with the gummi bear having increased by 80% in size. 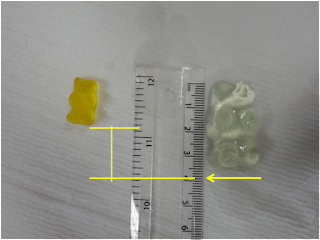 Fig 2) The soaked Gummi bear has clearly increased in size after 48 hours when compared to   the control.

The Gummi bear was left for a further 72 hours (or more accurately the weekend). When measured the Gummi bear had actually shrunk to 30mm in length. This suggests that Gummi-bear integrity is gradually lost and this force eventually exceeds that of water based expansion.
Unfortunately due to lack of regular timepoints it is impossible to say when peak Gummi-bear size was achieved and when disintegration began. Further problems were encountered in terms of measurement accuracy, as initial readings were taken from the bottom of the beaker (so as not to expose the gummi-bear to the air) but the transparent edges of the bear may have made it appear smaller than it actually was.
Despite these limitations we still feel it is possible to extract some useful kinetics from the data we obtained. 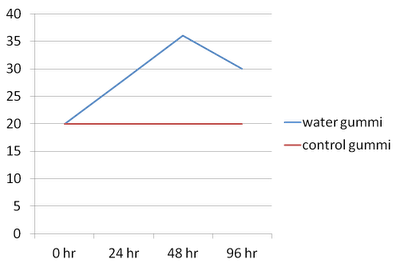 If we assume that 36mm was the maximum length the gummi bear achieved, this means that it's rate of growth when exposed to water was 0.33mm/h. If we assume disintegration of the gummi bear occurred after 48 hours then the rate of disintegration is - 0.13mm/h. Assuming disintegration was always occurring that gives a possible "real" growth rate of 0.46 mm/h.
To control for the possibility of gummi bear shape having an effect on growth, a different shaped version of the sweet was tested (Supplementary data). The results showed that these other gummis become engorged when soaked in water

Discussion
These results show that gummi bears do indeed grow when soaked in water. This could provide an explanation for how GUT can occur and remain a persistent problem. Our results show that the gummi begins to shrink or disintegrate after 72 hours which does make claims of the gummi bear remaining stuck in the throat "hard to swallow". There is still clearly a lot of additional research required. In these experiments we only used water - although a more natural environment would be saliva. Unfortunately, we did not have the time or the volunteers to provide the volume of saliva required for this experiment. Also with regards to the 2 week GUT survivor the natural environment of their throat is Gin and tonic based. It would therefore be interesting to see what happens to a gummi bear soaked in alcohol or G&T. Several researchers have shown that alcohol does indeed cause gummi bears to grow and also apparently pack a lot of alcoholic punch. If this is the case then people who have had 2 week episodes of GUT should avoid consuming G&T soaked gummi bears at all costs as the results could be catastrophic.
For normal people these results strongly suggest that you should chew your gummi bears before swallowing and/or refrain from sucking on a whole bear for too long.

Acknowledgements
I'd be happy to credit the researchers who made this story possible but they are possibly too embarassed humble to accept. I will happily credit them if they so wish.

Bioblogist
United Kingdom
I have a degree in Genetics, a PhD in Molecular Biology and work as a postdoctoral researcher on things like developmental biology, cancer and cell function. I'll try and share biology-based things in my life from work to entertainment and anything in between.